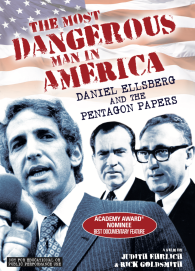 In 1971, Daniel Ellsberg, a high-level Pentagon official and Vietnam War strategist, concludes that the war is based on decades of lies.  Armed only with his conscience, steadfast determination and a file cabinet full of classified documents, he leaks a top-secret Pentagon study to The New York Times, making headlines around the world.

Hailed as a hero, vilified as a traitor, and ostracized by even his closest colleagues, Ellsberg risks life in prison to stop a war he helped plan. This political thriller is a riveting story of how one man’s profound change of heart led directly to Watergate, Nixon’s resignation and the end of the Vietnam War.

“Compelling… (a) gripping mix of politics, history and the derring-do of one of the era’s most audacious capers…deservedly Oscar nominated.”
–The Washington Post

Streaming options and Educational use DVDs from New Day Films

Vimeo on Demand: Rent or Buy

3 thoughts on “The Most Dangerous Man in America: Daniel Ellsberg and the Pentagon Papers”