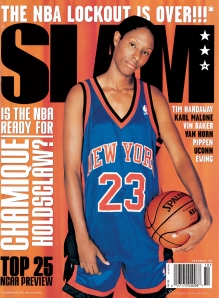 SLAM Magazine featured Chamique in October 1998 when she was a senior at the University of Tennessee, soon to be picked number one overall in the WNBA draft the next year. Chamique was the first female to grace their cover and remains the ONLY female to have had the privilege. Check out this great article by Adam Fleischer about her journey since her rise to stardom and what she’s working on now, including the production of Mind/Game. Go Chamique!